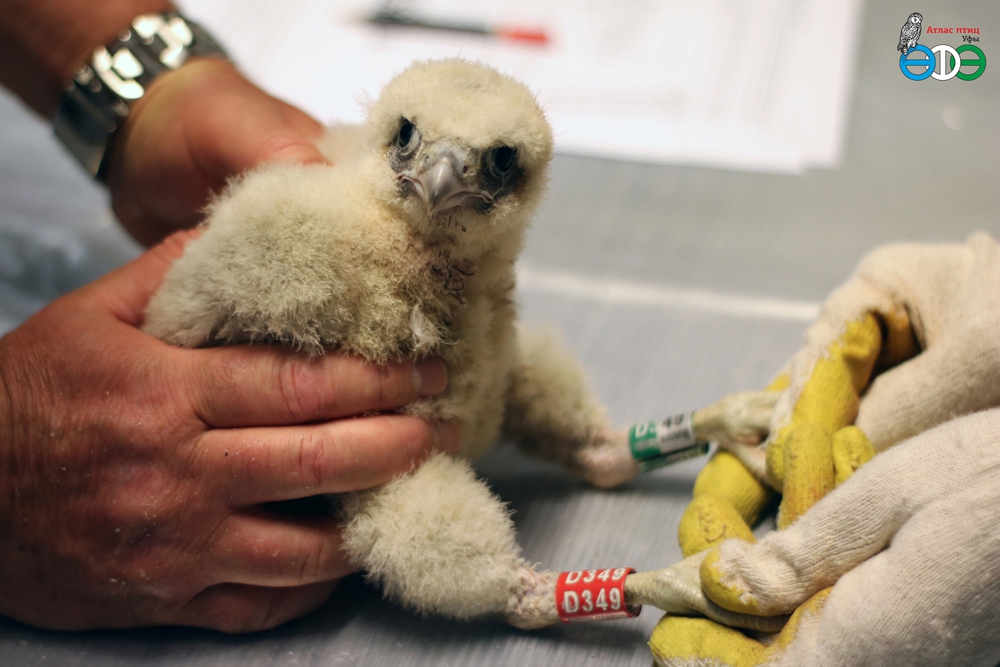 On the morning of Friday, June 10, the planned ringing of peregrine falcon chicks took place in the Ufa office of Uralsib Bank. The process was attended by ornithologists of the Ufa Birds Atlas project, a veterinarian, curators, as well as invited journalists and photographers.

Chicks are ringed at the age of 3 weeks, as during this period they are able to endure stress and recover quickly. Marat Mamleev, branch manager of PJSC BANK URALSIB in Ufa, took part in the process. He assisted the scientists in transporting the first chick from the nesting site to the table with measuring devices. Ornithologists filled out a passport for each chick with detailed measurements, indicating weight, wingspan and other parts of the bird's body.

— For us, the falcons have become almost family. The project with an annual broadcast in 2022 turned 4 years old, but the very first pictures in the bank’s archive show that the birds have been with us since about 2006. We are pleased with such a neighborhood, said Marat Mamleev. — We care about the preservation of the environment, postpone the washing of facades, provide scientists with access to the site, as well as the transfer of video archives from the camera. It is already customary that in spring and summer even our meetings with large clients in the city may begin with questions about the life of peregrine falcons. Interest in nature and animals unites people.

Traditionally, the chicks were given names. The names Pioneer and Spartak were born on May 19 - on the day of the 100th anniversary of the pioneer organization (the first pioneers were named "Spartak"), and also one was named after our glorious Ufa, and the youngest - Salavat, in honor of the Bashkir hero and the Salavatsky district of the Republic of Bashkortostan .

Small rings with color marks of the region and numbers were fixed on the paws of the falconers. They are practically weightless and do not interfere with them.

— We order rings in advance at the Birds of Prey Ringing Center of the Russian Raptor Research and Conservation Network. All data about the chicks are carefully studied. Ufa is the only city in Russia where such a number of peregrine falcons are constantly observed: already more than 12 pairs. Only 4 pairs live in natural conditions, the rest are in close proximity to humans, — said ornithologist Elza Gabbasova. — Successful adaptability to life next to humans will help these rare birds to restore the population of the species.

It’s covered, according to the calculations of ornithologists, the chicks should be after June 20. Confident flights will start a little later. After that, the parents, together with the young, begin to actively hunt within the city, in autumn (presumably in October) they leave the region for the wintering period. Young peregrine falcons do not form steam during the first 2–3 years of life. Therefore, they can be seen in different cities of Russia and other countries.

Peregrine falcons have been breeding chicks on the roof of a bank in Ufa for over 17 years in a row. What and how is happening on the roof of the bank and why it is convenient for birds to be located there is described in the film by Galiya Gaysina (ornithologist, participant in the Atlas of Birds of Ufa project) and a group of scientists https://ufabirds.ru/film-o-gnezdovanii-sapsanov- na-banke-uralsib-v-ufe/.

P.S.: By the way, the peregrine falcons endured the stress from banding very quickly — after an hour they were actively snatching pieces of food from the mother peregrine falcon.

The broadcast from the nest of peregrine falcons at the Uralsib bank is still available on the bank's YouTube channel live, https://www.youtube.com/watch?v=BIOzk1ON8tw.

This is a unique experience of watching peregrine falcons living in an urban environment. The last 12 hours of recording are available for viewing - you can rewind and review the life of the falcon family. In the chat you can ask questions about the project and birds, mark interesting moments. As usual, the on-duty ornithologists of the project "Atlas of birds of Ufa", the Bashkir branch of the Union for the Protection of Birds of Russia and the Russian Geographical Society in the Republic of Bashkortostan will be able to answer the audience's questions.

Source: Atlas of birds of Ufa