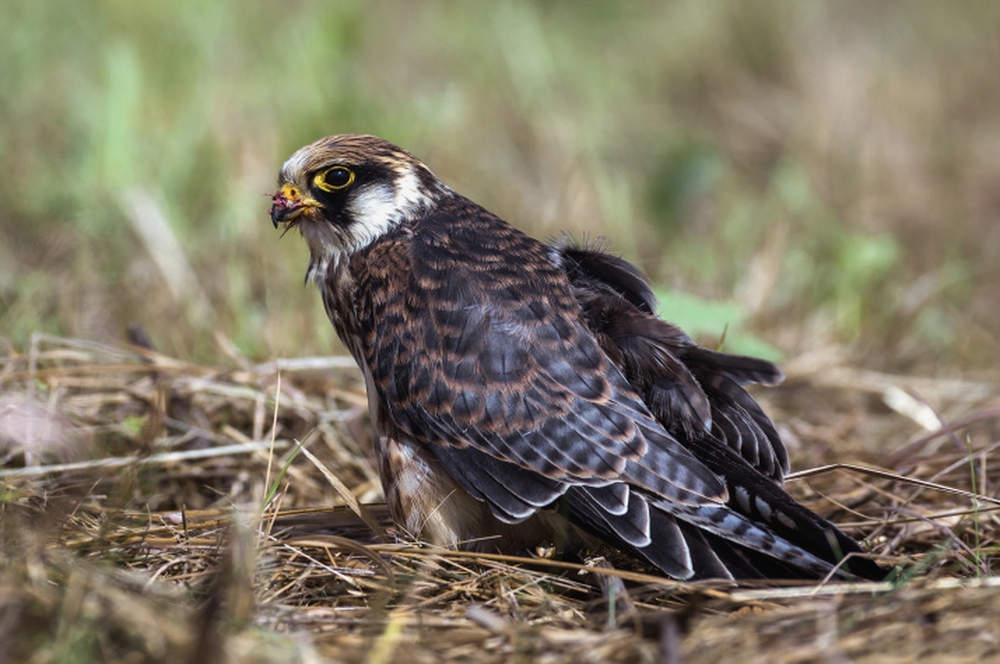 Small, brave and impetuous: the Red-footed Falcon was chosen as the "bird of 2021" in Russia

The Red-footed Falcon (Falco vespertinus) is a small, brave, graceful and swift bird. Ornithologists consider it the smallest diurnal raptor species in Russia. The state of the Red-footed Falcon population causes concerns among scientists: in European Russia it encounters about 20 thousand pairs and is steadily decreasing. In many regions of our country, the male fawn is listed in the Red Data Books.

"Of the small falcons, it is the Red-footed Falcon that is now the most problematic species. It has greatly reduced its numbers throughout its entire range, its colonial settlements have almost disappeared. settle, restore their numbers. It is very important now to identify its most stable nesting grounds, from where this species could re-settle, restoring its numbers."

An adult male Red-footed Falcon cannot be confused with any other representative of small falcons. In its plumage, exquisite dark ash-gray tones on the back and wings are set off by the brick-red color of the lower abdomen and "red pants" (bright feathers on the legs). The saturation of their color is a sign of the bird's reaching puberty. In females, the color is more modest, ocher-gray with longitudinal streaks on the belly. The head is decorated with a graceful dark "mask", ending into a dark "mustache".

The Red-footed Falcon is a tireless hunter. However, small — smaller than pigeon's — size and rather weak and short beak do not allow it to kill large prey. Kobchik is a Lord of large insects, such as locusts, beetles, grasshoppers, butterflies, dragonflies, bees and wasps, which make up about 80% of its very nutritious and protein rich diet. The falcon has a truly amazing coordination of movements, which makes it possible to catch even very small prey both in the air and on the ground. Like the Kestrel, it hovers in the air in fluttering flight, looking for prey. There are observations of how birds accompany grazing herds, grabbing scared away insects. However, if the opportunity presented itself, this small winged predator will not give up on a small rodent or lizard, which are especially important part of its diet during the period of raising chicks.

Despite its small body size, the Red-footed Falcon has a perky, brave and even slightly "cheeky" temter. According to observations, sometimes a tiny male falcon can even fight with a heron, when trying to recapture a profitable nesting territory. Red-footed Falcons often settle in colonies, encountering dozens to hundreds pairs, sometimes in inhabited or abandoned rookery. These are birds with a highly developed social system: if case of danger for the clutch or chicks, all adult birds bravely protect their ciolony members. Red-footed Falcons are very responsible parents. A male never abandons its female hatching or raising chicks. It will catch as much prey as the family needs.

In nesting colonies, the backbone of the future migratory flock is also formed, which heads south in early October. The Red-footed Falconis well adapted to the temperate continental climate, but does not withstand even mild frosts, and prefers to spend the winter in warm countries. They return to their nesting grounds by mid-April. Their favorite habitats are open ones, such as steppe, forest-steppe, farmland. On the contrary, the Red-Footed Falcon does not nest in large forests, since its flight is not adapted to maneuvering between trees.

“The Amur Falcon also winters in southern Africa, flying over ten thousand kilometers over almost the entire south of Asia and the vastness of the Indian Ocean,” says Evgeny Koblik, senior researcher of the ornithology department of the Zoological Museum of Moscow State University. At this, almost the entire world population of the species, in the form huge flocks (up to 5 000 individuals) flies through the "bottleneck", the forested canyons of Nagaland in eastern India. It is here that the local residents catch migratory falcons in all possible ways. Only recently this predatory extermination was stopped and the number of the species began to recover. "

The decline in the number of male foxes is associated not only with extermination during migrations, but also with the fact that, while hunting for insects on farmland, birds are faced with poisoning with pesticides and other agricultural chemicals. These harmful substances accumulate in the body of fawn and after a while cause serious illness and death. And this problem is relevant not only for the red-footed and Amur falcons. The solution could be the development of ecological agriculture. Another important factor in the decrease in the number of red-footed falcons is the cutting down of large trees suitable for nesting and the lack of the necessary food supply near the nesting sites.

The revealing of the Red-footed Falcon habitats, the creation of reserves with a special protection regime for this species, the ecological education of the local population — all these are the tasks of the coming year 2021, which for scientists and nature conservationists will pass under the sign of this amazing feathered predator.

Previous PostAbout us
Next PostFlight Identification of European Passerines
Comments (1)