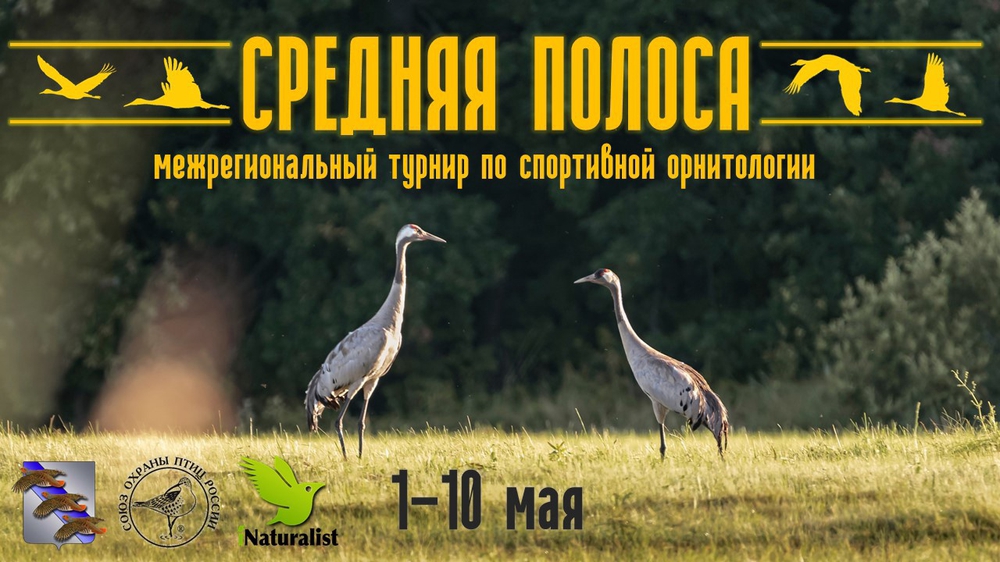 We invite you to take part in the tournament in sports ornithology “Middle lane”.

Regulations on the interregional tournament in sports ornithology “Middle lane”

Internet community “Birds of the city of Kursk” with the support of the all-Russian public organization “Russian Bird Conservation Union”.

The main goals of the tournament

1) Collection of information on the occurrence of birds in the regions of the middle zone of the European part of Russia;
2) Attracting the attention of observers to the least explored areas;
3) The development of the movement of amateur ornithologists in Russia.

Main site of the competition

Geography of the tournament

Regions of central Russia: Tver, Yaroslavl, Ivanovo, Kostroma, Smolensk, Kaluga, Moscow, Vladimir, Nizhny Novgorod, Bryansk, Oryol, Tula, Ryazan, Penza, Kursk, Belgorod, Lipetsk, Voronezh, Tambov regions, the Republic of Mordovia, Chuvashia, as well as the right bank of the Volga in the Ulyanovsk, Samara, Saratov regions, the Volga right bank of the Republic of Tatarstan. Region names are given in accordance with the classical floristic summary by P.F. Mayevsky “Flora of the middle zone of the European part of Russia”.

The tournament is held in a team format. The team of participants includes from 1 to 3 observers, users of the iNaturalist platform. The preferred number of team members is 3. The team can be represented by members from different cities and regions. Collective iNaturalist accounts are not eligible to participate in the tournament. At the same time, personal results are taken into account in all nominations of the tournament.

Target project: https://www.inaturalist.org/projects/srednyaya-polosa-2022-belye-pyatna
Summing up in nominations 1-3 will be carried out on the basis of the analysis of data upload from the relevant projects. If the number of counted species is equal, the following rules will apply: for team standings, the team with the greater sum of counted species from each participant wins; for the individual standings - the participant with the most observations wins.

4) "Best observation" (personal) - the most interesting faunistic observation. Determined by tournament organizers based on iNaturalist statistics on the rarity (frequency of occurrence) of specific species. In disputable situations, the decision is made taking into account the expert opinion of ornithologists.
5) "Best Photo" (individual) - nomination for the Audience Choice Award. Until May 5, observers offer the most artistic / interesting photos of birds taken as part of the tournament. 10 photos selected by the organizers of the tournament will be admitted to the audience voting. One observer can submit no more than 1 photo to participate in the nomination.

Participants who wish to form and lead a team offer themselves to other participants as a captain and recruit a line-up. To form teams, you can use, in particular, a special discussion on VK (https://vk.com/topic-161928724_48567667). If the team has one member, he is also the captain. For registration, the captain fills out a team application using the Google form https://forms.gle/FEsx952hqNgjGfR97.
If the google form did not work, use the alternative Yandex form https://forms.yandex.ru/u/6266cf12ef681f170156eb03/.
In the application, the captain indicates the name of the team, the names of the participants (to be used in the preparation of diplomas and certificates), their nicknames on the iNaturalist platform, links to personal pages in VK, if available, as well as the cities that the participants represent.

Observations of research-level birds made within the framework of the geography of the tournament in the period from May 1 to May 3 inclusive are considered credit.

Important! All observations and photographs must be taken in nature. Photos of pet or captive birds and staged footage are not allowed.

The winners and prize-winners of all nominations, who took the first 3 places in the team / individual competition, will receive the corresponding diplomas. All other teams can receive electronic Certificates indicating the names of team members (optional).